Your SEO optimized title Skip to main content
Shop Now New Hours Due to COVID-19 FREE SHIPPING on most orders $79 and Up, excludes Bikes & Fitness Equipment (516) 781-6100 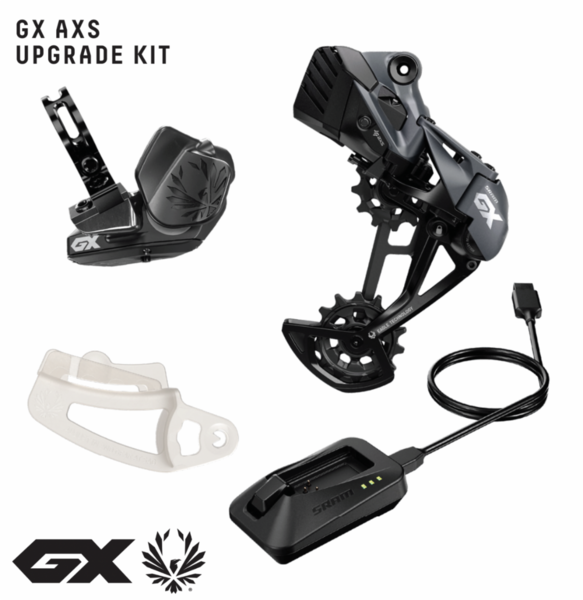 New Orders Shipping Late May 2021
New for 2021, The GX AXS upgrade kit is your entry point into wireless drivetrain simplicity.

Compatible with any of Sram's Eagle ecosystem cassettes and crank arms, the upgrade kit allows you to experience Eagle AXS without needing to buy an entire groupset; provided you already are using SRAM Eagle products.

No matter if you are looking to upgrade your ride, or looking for great value replacement parts, look no further than the SRAM GX AXS upgrade kit.

With proven AXS wireless technology, and the rugged durability of GX, it’s Eagle at its best. Featuring an expanded 520% range, seamless compatibility with the rest of the ecosystem, and the ability to customize with the AXS app, GX Eagle AXS is your entry point to the future.

Simplicity and performance made for all day adventures. The pure shifting performance of Eagle AXS is now available with GX. Shift under load, over the roughest terrain, uphill, without changing your grip on the bar. GX Eagle AXS changes your level of control on the bike when you’re under pressure and pushing hard. More than that, it changes your relationship with the bike. No cable, housing or wires to manage opened up design and engineering possibilities with the GX Eagle AXS controller. Featuring the proven ergonomic touchpoints that make shifting effortless, they are customizable to your preferences, allowing you to choose which button does what through the AXS App.

How do you pronounce the AXS portion of the groupset name?
AXS is pronounced the same as the word, “access.”

AXS is pronounced the same as the word, “access.”

What are the main benefits and key features of GX Eagle
AXS?

•    Wireless electronic shifting with engineered hardware for a new
ergonomic experience based on touching a button rather than
pushing a lever.
•    Faster, more consistent shifts. Letting you shift when you
want, under load, without ever having to plan around terrain.
•    Gathering useful data, telling you how many shifts have been
made, how frequently each cog is being used, helping you make
smarter choices on chainring size, and more.
•    Eagle is a complete drivetrain system that was developed to be
an integrated high-performance ecosystem. The engineering
and testing that went into the development provide for
maximum performance, safety, and long-term durability to
ensure a great consumer ride experience. SRAM guarantees
this performance when Eagle drivetrains are used as a
complete ecosystem.

What is included in the GX Eagle AXS upgrade kit?

Can I fit SRAM GX Eagle AXS to any mountain bike and what
are the compatibility requirements for GX Eagle AXS?

How does SRAM GX Eagle AXS connect and integrate with
other wireless components that SRAM makes?

All AXS components can connect to one another using Sram's
proprietary encrypted wireless network. The AXS mobile app
is used for personalization of the component controls and to
serve as a single access point for all SRAM AXS connected
products. Additional connectivity included with AXS is ANT+
and Bluetooth.

Does SRAM GX Eagle AXS have smartphone connectivity?
AXS components have Bluetooth connectivity through the

SRAM AXS app. If there is a firmware update, it can be handled
through the app. There is no dongle.

Can I assign different functions to the buttons (e.g. move the
derailleur outboard with a left shifter click)?

Controller touchpoints are totally customizable to your
preferences, allowing you to choose which paddle does what
through the AXS App. Choose from three functions: Inboard
shift. Outboard shift. Dropper. Yes, you can designate
any of the touchpoints to control your electronic Reverb
dropper seatpost.

How do I know if my battery is low? What are the charge
levels and how many hours of riding can I expect to get on a
full charge?

SRAM AXS uses a fully encrypted, secure and proprietary
SRAM wireless protocol that has been proven in the real
world in SRAM's road drivetrain applications and more recently on
the World Cup circuit.

The GX Eagle AXS system is completely water and dust proof
to the IPX7 international standard. For a mountain biker, it
means no hesitation to head out when the weather looks
less than ideal. When washing AXS components be sure to
avoid direct high pressure washing, like other components on
a bicycle there are many moving parts with lubrications that
can be washed away with aggressive washing techniques.

What type of batteries do the new GX Eagle AXS
controller require?

One CR2032 watch battery – commonly found at retail
outlets. The lifespan of this battery is significant – 2 years or
more is common.

How many hours of riding can I get from a fully charged AXS
derailleur battery?

Approximately 20 hours of ride time or more. The battery weighs
25g and is detachable with a single clip. It’s also “hot swappable”
if needed – from GX Eagle AXS derailleur to your Reverb AXS
seatpost or even your SRAM RED or Force eTap AXS road group.
And it only takes an hour to charge.

Are there any auxiliary buttons on the controller with
unassigned functions that can be used to control other
wireless components or perform special functions?

Yes. All AXS components can connect to one another. You
can use SRAM RED eTap AXS shift levers to build a drop
bar bike with an GX Eagle AXS drivetrain. The GX Eagle AXS
drivetrain is also compatible with the road BlipBox and
control buttons.

What is the Q factor on GX Eagle AXS cranks and is it
different to current Eagle?

The Q factor for GX Eagle AXS cranks is the same as the
current Q factor for SRAM's DUB cranksets. Different chainlines
are available for compatibility specifications.

What chainring size options do you offer with SRAM GX
Eagle AXS Groupsets?

Is there an oval chainring option?

SRAM currently has an Eagle oval chainring which is compatible
with AXS. The colorway may be different to AXS specific
colorways depending on specification.

What size and type of tool is required to remove SRAM GX
Eagle AXS 1x chainrings from the crank spider?

Use a T25 Torx key to remove the three bolts holding the direct
mount chainring to the crankset.

The performance, features, and durability of the X-SYNC 2
chainrings used for GX Eagle AXS are the same as SRAM's current
GX Eagle chainrings today.

What cassette size ranges do you offer for GX Eagle AXS?

What type of freehub body is required for GX Eagle AXS
cassettes?

No. These cassettes require a standard HG-style cassette tool
with a 7-8mm spline depth.

Is there a cassette available with an 11-tooth start so I don’t
have to change the driver on my rear wheel to XD?

SRAM offers a PG-1230 Eagle cassette which utilizes the HG
splined driver body interface. This is compatible with all of
our Eagle drivetrain parts as part of the Eagle ecosystem.
However, for optimum performance the XG-1275 cassette is
used in the GX Eagle AXS offering.

The new universal Eagle chain gap tool is used to set the
correct position for the derailleur. This tool works for all of SRAM's
Eagle drivetrains, 10-50T, 10-52T, mechanical and AXS.
The majority of standard and professional tools will work on GX
Eagle AXS drivetrains. Care should always be taken to ensure
the tool is fully compatible with each component - this can be
found on tool manufacturers specifications and websites.

What chain lubes do you recommend for new AXS chains?

SRAM GX Eagle AXS chains use commonly available bicycle
chain lubes and are compatible with the same lubricants as SRAM's
other chains.

Will a new RED AXS road chain work on a SRAM
Eagle drivetrain?

The Eagle chain architecture and design are similar, durability
and lifespan are also similar.

How do I size a chain for a 1x SRAM GX Eagle AXS
drivetrain?

Wrap the chain around the chainring and largest cassette
cog, bypassing the rear derailleur. For hardtail bicycles,
add two inner links and two outer links where the chain
starts to overlap for a proper length of chain for your
GX Eagle AXS drivetrain.

For full suspension bicycles, in order to size the chain, first
compress the rear shock to the point in the travel where
the rear axle is farthest from the bottom bracket. Deflate or
remove the rear shock if necessary. Add one inner link and
one outer link where the chain starts to overlap for a proper
length of chain for your GX Eagle AXS drivetrain. See the
user manual for installation for full details on the SRAM
website service link.

Yes they are. Eagle PowerLocks can be easily differentiated by
the word “Eagle” stamped on the side.

Can a SRAM GX Eagle AXS PowerLock be installed and
uninstalled repeatedly, or does it need to be replaced with a
new PowerLock after being removed one time?

PowerLocks are one time use only. If they are repeatedly
installed and uninstalled the PowerLock installed position will
become less secure.

What is the max cog size that is compatible with GX Eagle
AXS rear derailleurs?

What type of clutch mechanism does the GX Eagle AXS
derailleur use? Is it the same as the new RED eTap AXS
Derailleur?

The GX Eagle AXS derailleur uses a Type-3 Roller Bearing
Clutch with a proven track record from SRAM's current Eagle
ecosystem. It is not the same as the SRAM RED eTap AXS
derailleur Orbit fluid clutch.

What’s the difference between the roller bearing clutch and
overload clutch?

Why doesn’t Eagle use the new Orbit fluid clutch instead of
the roller bearing clutch?

SRAM's proven Type 3 clutch is utilized in this product because
of its track record of success and dependability. Road rear
derailleurs have a different dynamic than MTB derailleurs and
do not require the exact same chain retention specifics.

What is the Overload Clutch?

How robust is the GX Eagle AXS derailleur?

Yes. Both groups use the same SRAM batteries.