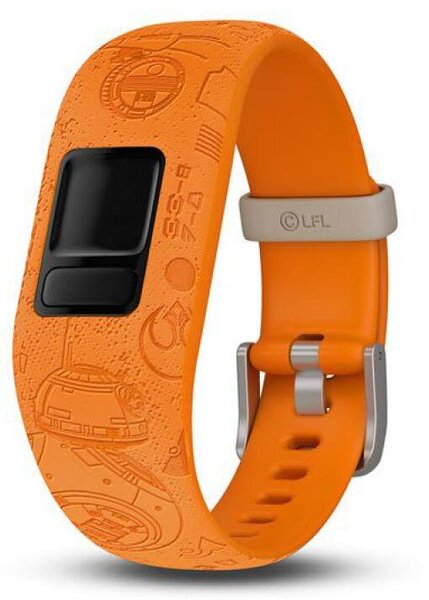 Featuring a BB-8™ etched design, this band works with vívofit® jr. and vívofit jr. 2. Purchasing a new band lets your kid gain access to a whole new world of app adventures. The band corresponds with the app adventure experience on the parent-controlled mobile app. What’ll it be?

With the Star Wars Light Side band, kids progress in Skywalker Saga — A Star Wars Adventure as they reach their daily 60-minute activity goals, inspiring them to do their best. With you as their helper, your kiddo will take part in stellar app adventures and relive all 9 episodes of the epic Skywalker story. They’ll escape Darth Vader™ with R2-D2 and C-3PO, help Han Solo and Chewie fight the Empire and even take on The First Order™ with Rey™ and BB-8.

When you purchase this band, the box includes a code you’ll use to unlock the Skywalker Saga — A Star Wars Adventure map on the Garmin Jr.™ app.